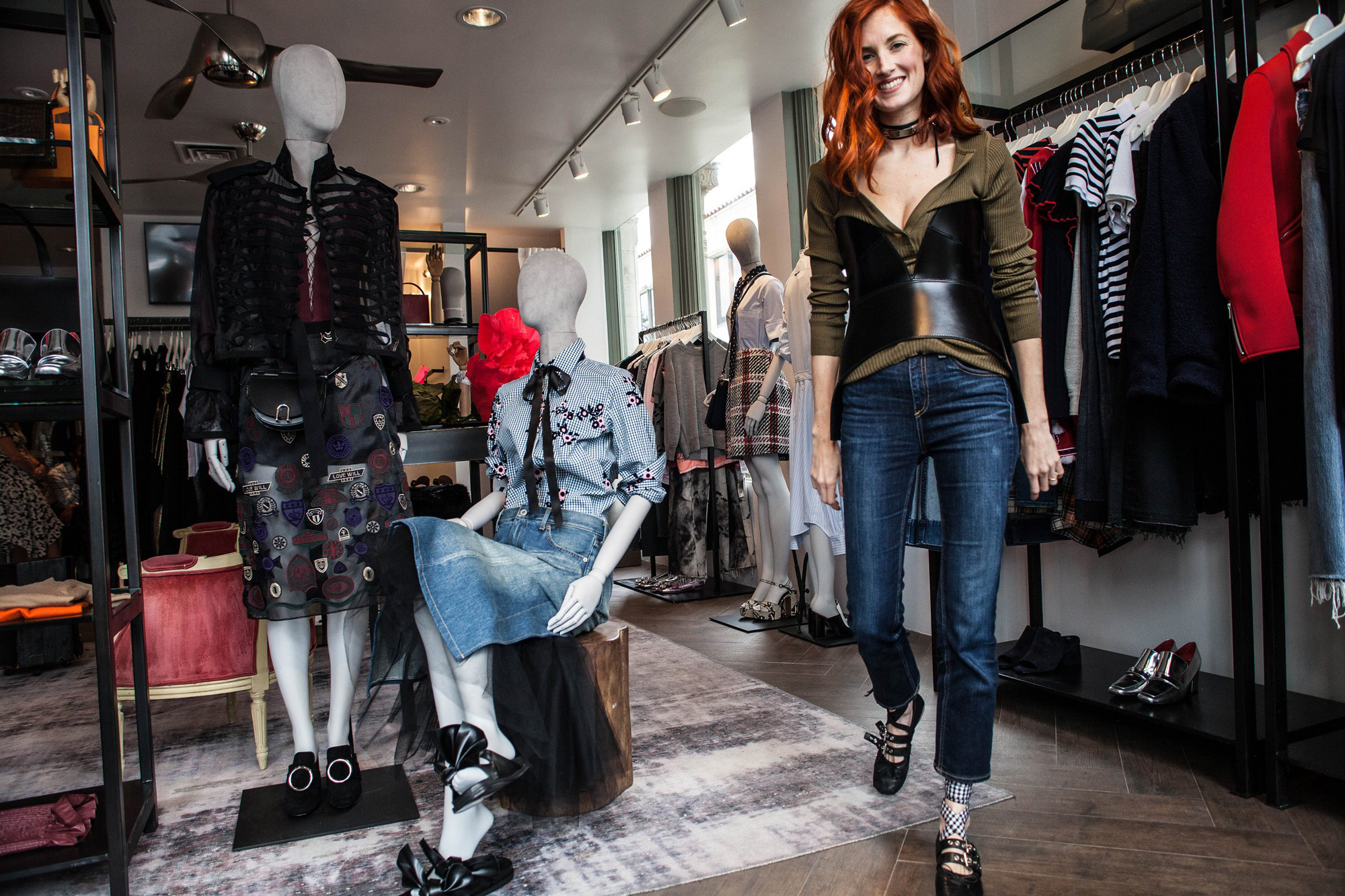 Taylor Tomasi Hill is what we call an O.G. street style star. Back in the early ’00s—before street style had turned into the melee it is now—the flame-haired Tomasi Hill was a fashion editor known for her quirky, colorful looks that combined prints, textures, and silhouettes with an attitude that made it all seem relatable. She paired cable-knits with Junya Watanabe jeans, and mixed gingham with stripes with a thrown-on ease that made all kinds of women want to shop her closet. The good news: Now you actually can. Earlier this year Tomasi Hill moved back to her hometown of Dallas to help relaunch Forty Five Ten, a much-loved boutique specializing in avant-garde designs by Sacai and Marc Jacobs. “I remember when Forty Five Ten opened in 2000, when I was still in college,” Tomasi Hill tells Vogue.com. “I would always shop there when I went home for the holidays because they had the most amazing sales!” She connected with Forty Five Ten’s cofounder, Brian Bolke, intermittently throughout her career as a stylist and fashion director, until he asked her to help relaunch the store last year. “In the beginning, we thought I’d be more of a consultant working in New York,” she says. “But after digging into the actual role, I just didn’t think I’d be able to make a big enough change without moving to Dallas.”

At the top of her to-do list was opening the store up to a broader range of customers, particularly younger women. “We have Southern Methodist University here, and I don’t think many of those girls were shopping at Forty Five Ten,” says Tomasi Hill. “It might have seemed a little unapproachable to them. You don’t want to walk into a store and feel like you can’t buy anything in it—I don’t. We still have those interesting, artsy pieces from Comme des Garçons, which Forty Five Ten is all about, but women want a uniform, too. They might not think they do, but they want to be able to get up in the morning and have their go-to pieces, plus those really special pieces that make an outfit exciting,” she says. “That’s really the basis of the store now—you can get both.” That means you might find Marques ‘ Almeida jeans alongside a Marni dress, or a Thom Browne suit next to Fallon chokers.

On top of reimagining the Forty Five Ten reboot with Bolke, Tomasi Hill has also launched a concept shop in Highland Park Village (which she describes as “the Rodeo Drive of Dallas”). TTH Forty Five Ten focuses on the younger women and students who walk around Highland Park Village with their friends or go there for dinner with their families. “I’m still thinking about the Forty Five Ten customer and the artsy woman, but I want to capture that SMU girl,” she says. “So there’s a mix of new brands we’re introducing. Harvey Faircloth, I’d say that’s a core TTH brand because it speaks to a lot of different women. We’re also investing in the Canadian label Beaufille—it’s so great—and Faith Connexion. It’s still uniform dressing, because you can get your preppy classics from Harvey Faircloth, then maybe mix in an awesome statement coat from Beaufille or a great little blazer with a bit of a grunge edge from Faith Connexion. Those brands are hitting different girls, but they’re girls who are willing to [mix them up]. Then there are brands like 3.1 Phillip Lim, which is so easy to wear. If I can get a girl in with Phillip, she might say, ‘Oh, now I feel like I can shop here, and I trust Taylor, so I’m going to try this other piece she styled with the Phillip pant.’ She can experiment with something new, but in a comfortable setting.”

Seeing how those women shop and wear the clothes is what Tomasi Hill is excited to zero in on. “Women definitely have a different way of dressing here [than in New York], and I’m still figuring that out. There’s a lot less black and they love dresses, because there’s always a party or function to go to,” she says. “But I will say there’s a lot of athleisure, and it’s my goal to get rid of that. These women are so stylish and have dream closets, so I don’t understand why they automatically wear those tight leggings. If you want something easy, just put on jeans and a T-shirt.”