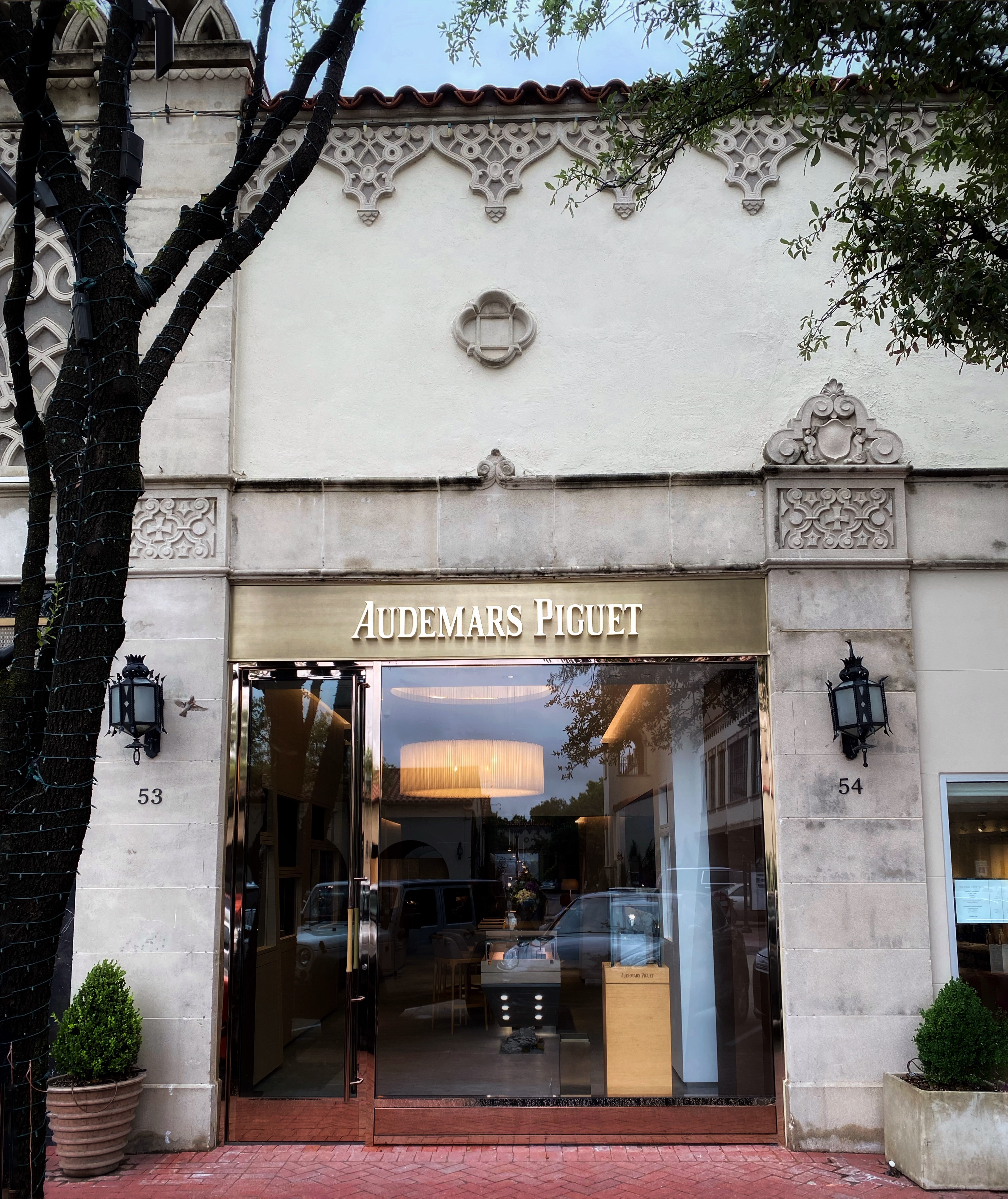 Audemars Piguet opened in Highland Park Village in June 2020 and is the first stand alone boutique in Texas.

Founded north of Geneva, Switzerland in 1875 by two friends, Jules Louis Audemars and Edward Auguste Piguet, Audemars Piguet remains family-owned and operated in what is historically known as the “cradle of complicated watches,” the Vallée de Joux. Both fourth and fifth generation watchmakers before joining entrepreneurial forces, the two men were members of the tightly knit network of artisans in their region and worked to develop watches with complex mechanisms and exact precision. 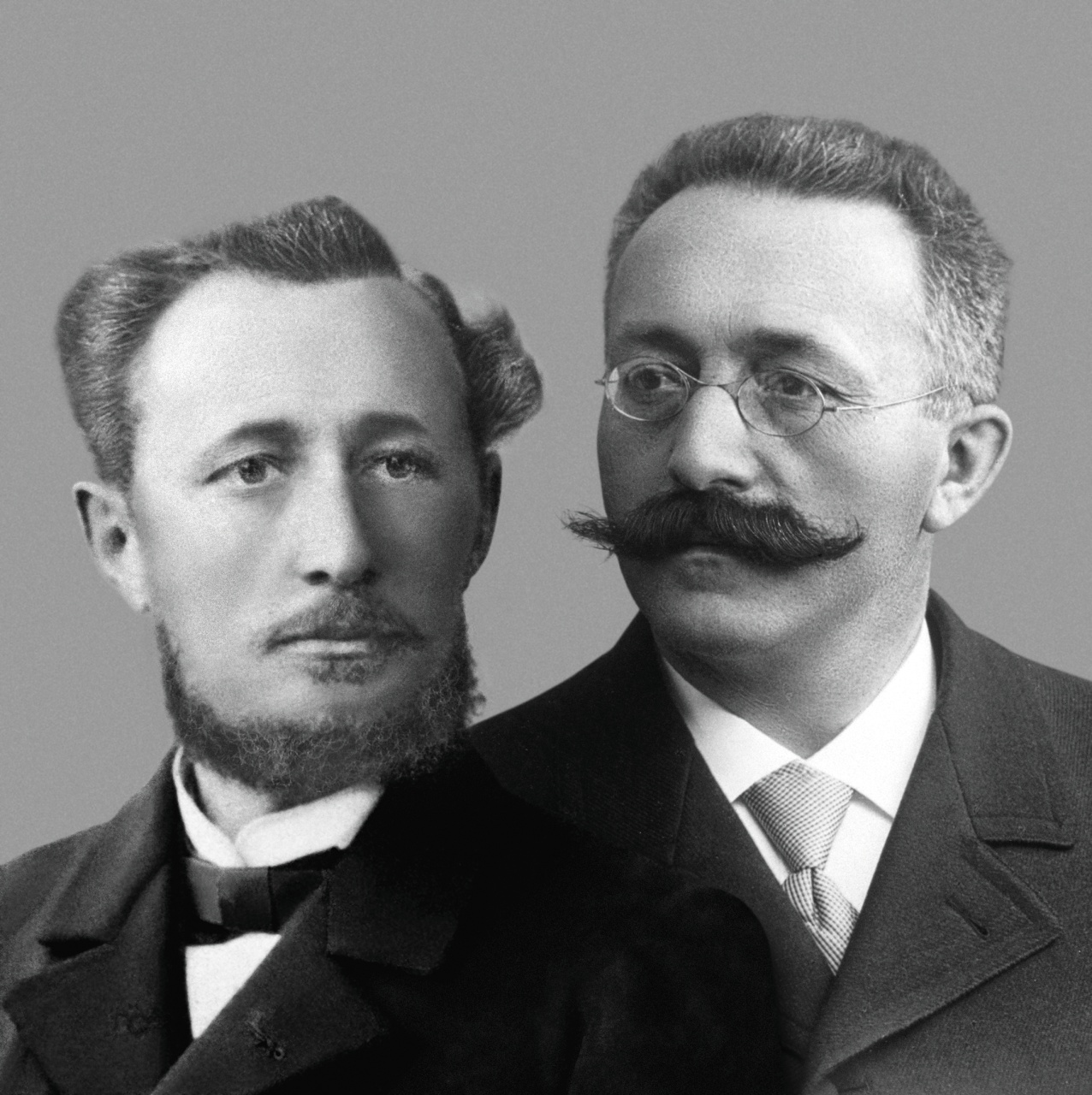 Co-founders Jules Louis Audemars and Edward Auguste Piguet were both watchmakers by trade.

The majestic landscape and natural resources of iron and timber in the Swiss mountain region inspired the watchmakers and allowed their watchmaking industry to grow and evolve over the years. The Audemars Piguet workshop grew slowly with under 50 highly specialized employees up until the 1950s and then reached over 100 employees from the ‘70s onward. The company is still focused on small production crafted with great care and attention to watchmaking traditions even today. 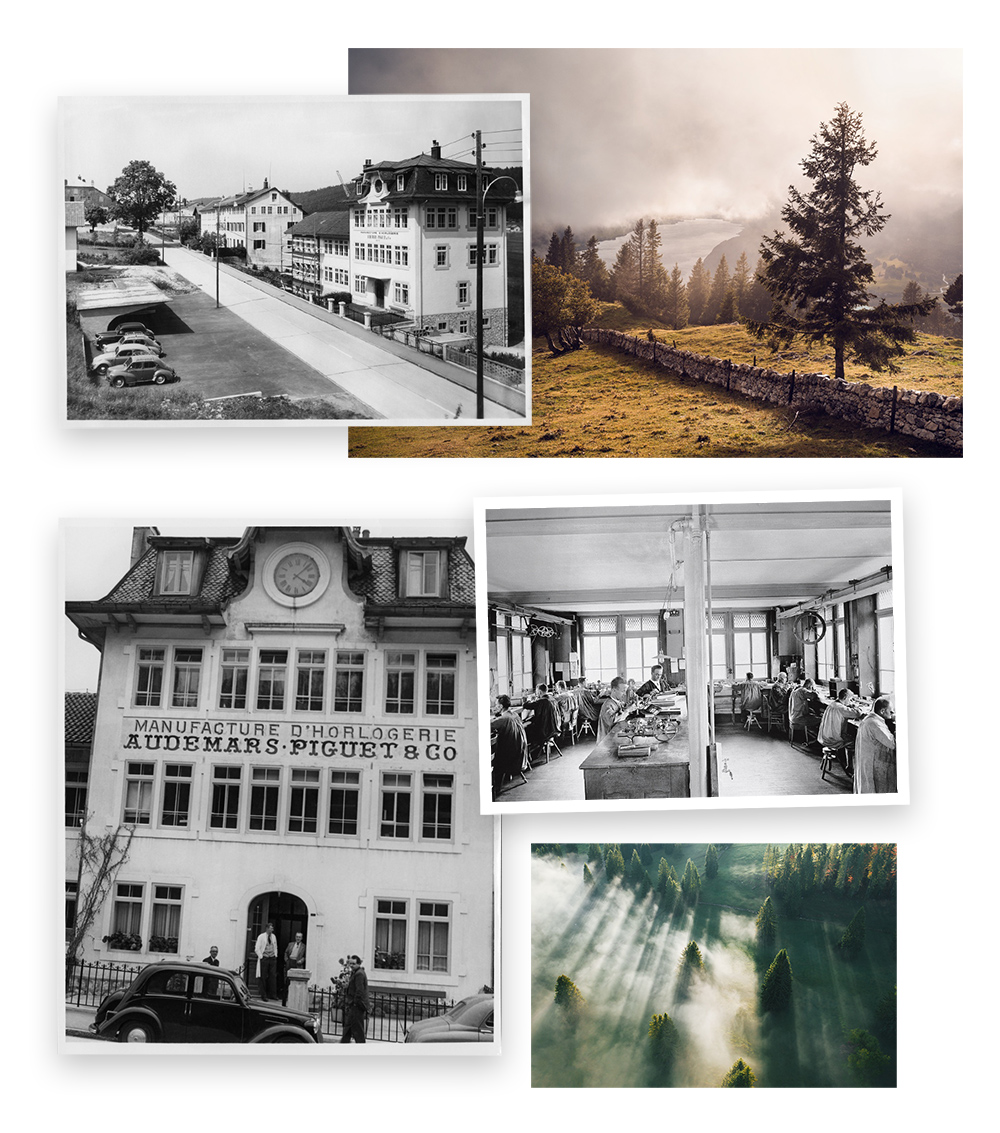 Audemars Piguet was born in the Vallee de Joux, an awe-inspiring region nestled in the Jura Mountains, north of Geneva. The company still operates out of Switzerland.

Dedicated to their craft and traditional techniques, the two businessmen soon orchestrated and oversaw the entire production of watches. They were never interested in mass-markets, even when large volume production became available, but remained committed to creating one-off complicated watches. They mastered intricate timepieces with pocket watches like the ultra-complicated Universelle from 1899 which featured a split-second chronograph, minute repeater, alarm, and calendar, making it one of the most complicated watches of its time. 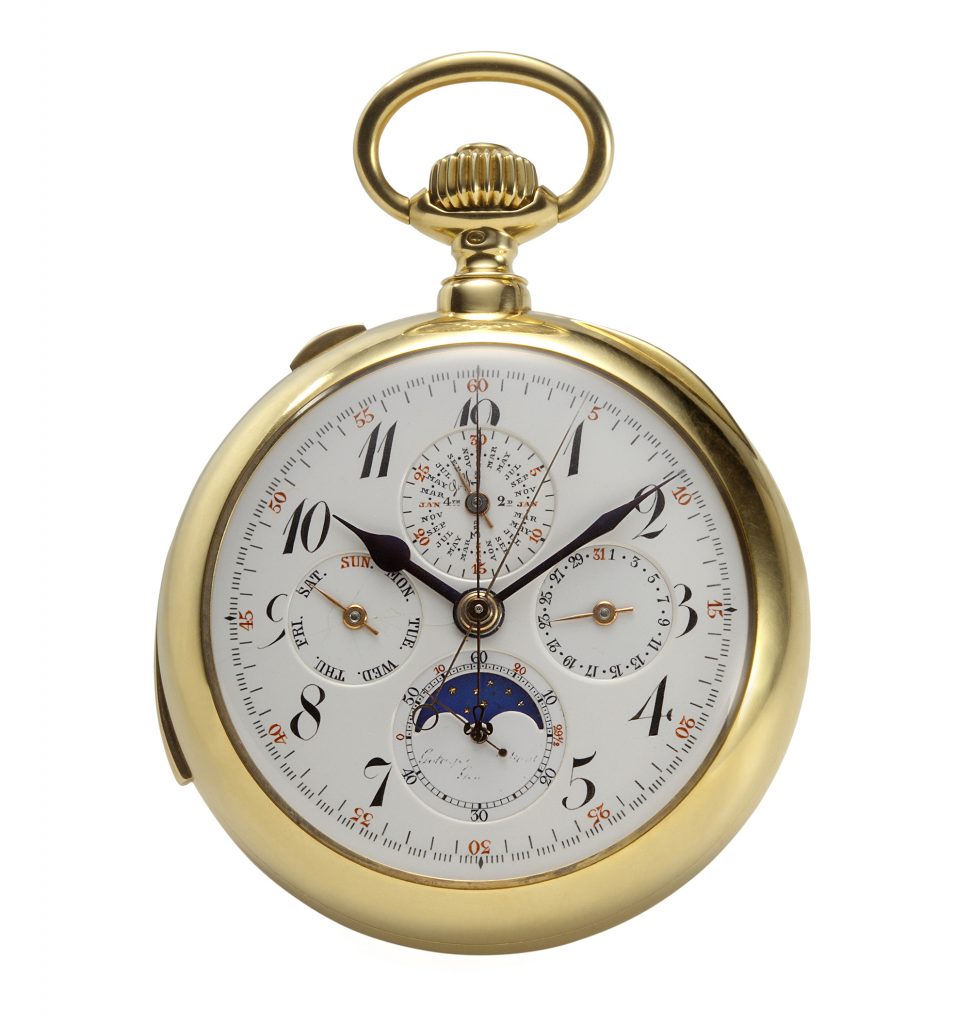 At the time, wristwatches were seen primarily as ladies’ jewelry and were difficult to produce due to the need to miniaturize its mechanical movements. Between 1892, when the first minute repeater wristwatch was sold, and 1965, Audemars Piguet created 550 complicated wristwatches. Today, those timepieces are incredibly rare, each with a hand-engraved serial number. 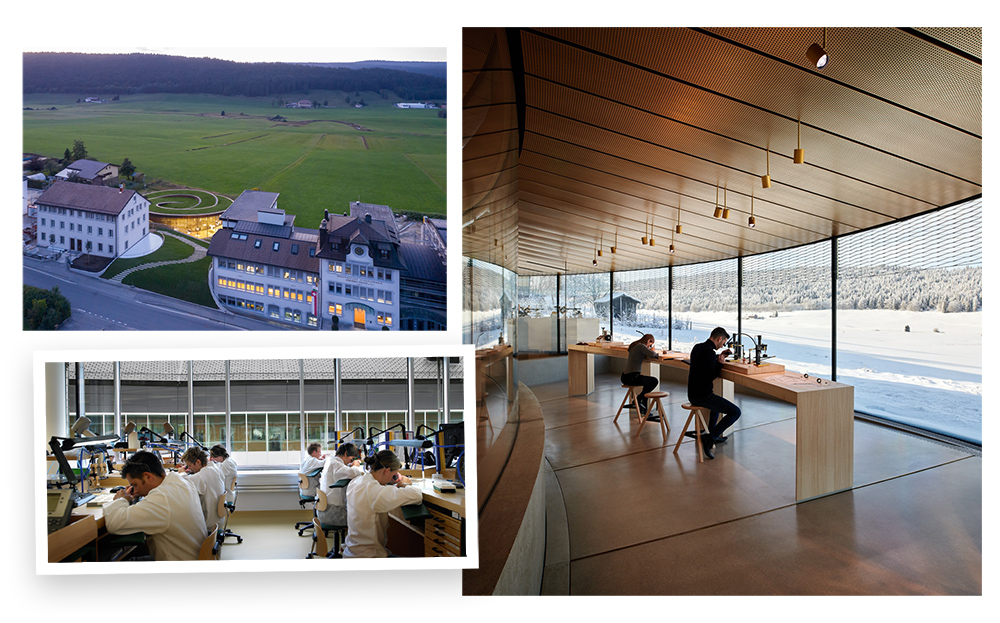 Audemars Piguet remains a family owned company by its founding two families and production continues to take place in its birthplace of Switzerland.

Audemars Piguet has pushed the boundaries of smallest, thinnest and largest watch models and has experimented with unconventional designs since inception. All watches are assembled and finished by hand and each collection has its own personality. Most notably, the Royal Oak watch made its debut in 1972 as the world’s first luxury sports watch made in stainless steel. It overturned watchmaking norms with its steel case, octagonal bezel and “Tapisserie” dial. The Royal Oak’s ultra-contemporary, durable design was meant to be worn every day, a watch for a new and more active lifestyle that was emerging with competitive sports in the ‘70s. Four years later in 1976, Audemars Piguet created a women’s Royal Oak version.

This April 2020, Audemars Piguet introduced a new iteration of the Royal Oak collection. The Royal Oak Selfwinding model in 34 mm is made for smaller wrists. Four models are available in stainless steel and 18-carat pink gold to complement the other Royal Oak Selfwinding and Quartz collection. The models are all enhanced with a silver-toned “Grande Tapisserie” dial and diamond-set bezels. 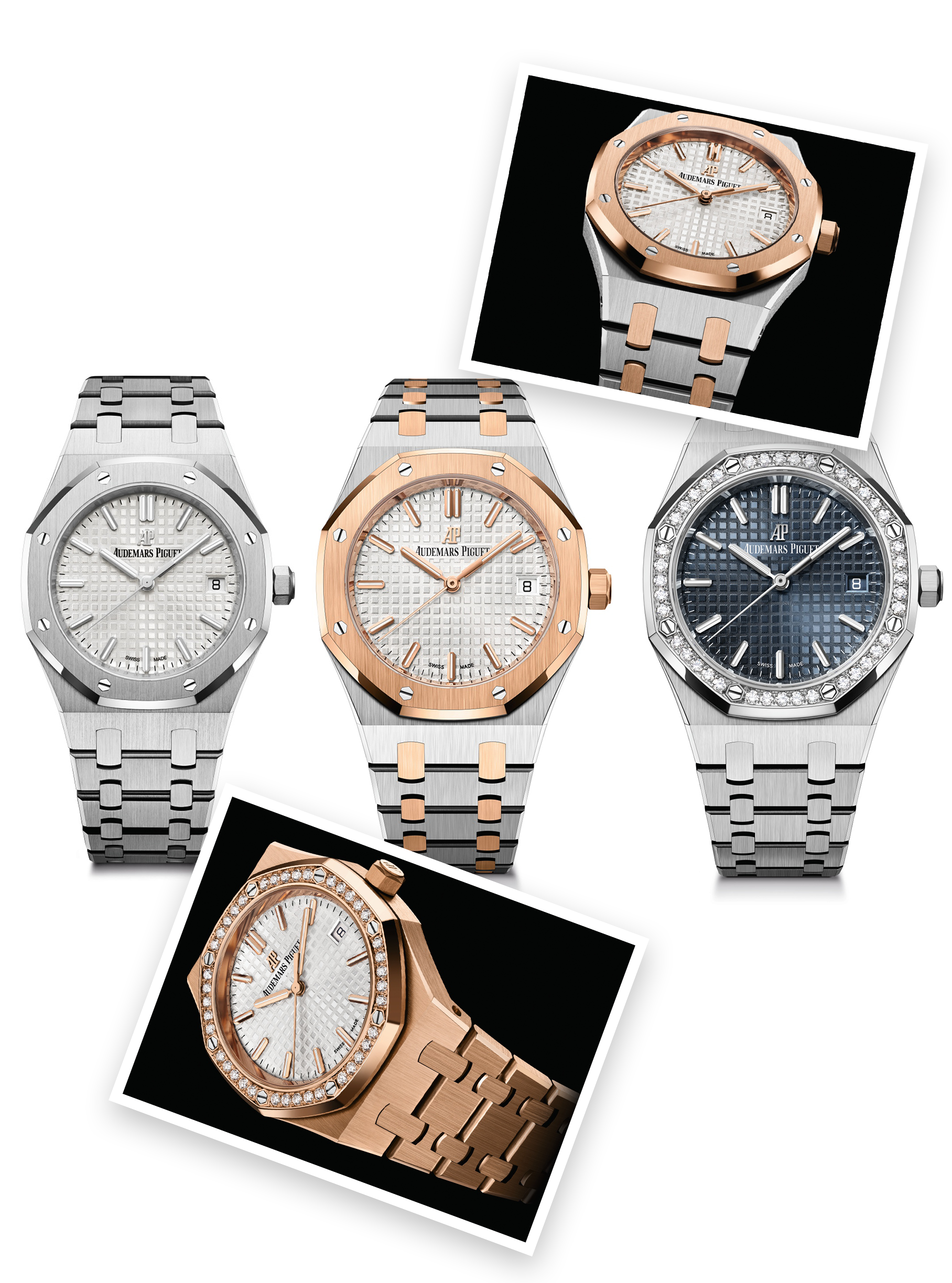 Discover the iconic Royal Oak collection and its new iterations in the Highland Park Village boutique.

At its core, Audemars Piguet is a family business, passed down through generations and still headquartered in Le Brassus. It is the oldest fine watchmaking manufacturer still in the hands of its founding families.

Highland Park Village is thrilled to be home to the very first standalone Audemars Piguet boutique in Texas. Stop in or schedule an appointment to discover a full collection of beautiful and unique men’s and women’s timepieces.

We see 100% cashmere in our forecast! Stay warm th

Calling all Brides! @lelarosebridal is hosting the

Dress your best this year with our styling tips fe

Don’t miss our feature on @gooddayfox4 this morn

Tune into @gooddayfox4 tomorrow morning at 8AM to

Love is all around @smwexchange! Stop by the store

There is still time to wine and dine under the lig